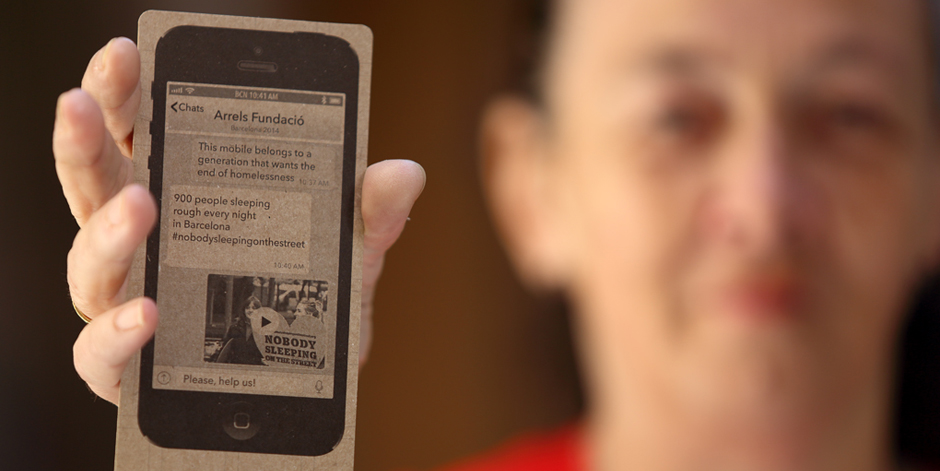 Arrels joins the Mobile World Congress that is being held in Barcelona these days, introducing a cardboard model including the application “Nobody sleeping on the street” also in Catalan and Spanish version, to show that there are 900 people sleeping on Barcelona streets and to encourage not only Congress attendees but everybody to give financial support.

From the 24th to the 27th of February, volunteers, employees and people attended in Arrels are distributing about 3.000 cardboard mobiles in the trade fair parks where the Congress is taking place, which brings together more than 70.000 people and means an important injection of capital for the city.

“For us it is a cutting-edge mobile, in the sense that we hope that many of the attendees belong to the generation that make possible that no one has to live on the street”, says Ferran Busquets, Director of Arrels.

The mobile application allows individuals, companies and groups to give financial support, explaining, moreover, what can be made with the fund-raising. For example, 10 Euros allow the street team to make three visits and 20 Euros make possible to pay one night accommodation. 45 Euros provide one week meal for one homeless and 350 Euros cover a rental flat for three people.

According to Xarxa d’Atenció a Persones Sense Llar (Homeless Care Network), there are currently 3.000 homeless people in Barcelona: 900 people sleep on the street, 1.400 are dependant on public and private resources to have one night accommodation and about 600 are living in irregular settlements. Last year Arrels attended more than 1.300 people. They were offered accommodation, food and health and social care.