The Lord of the city 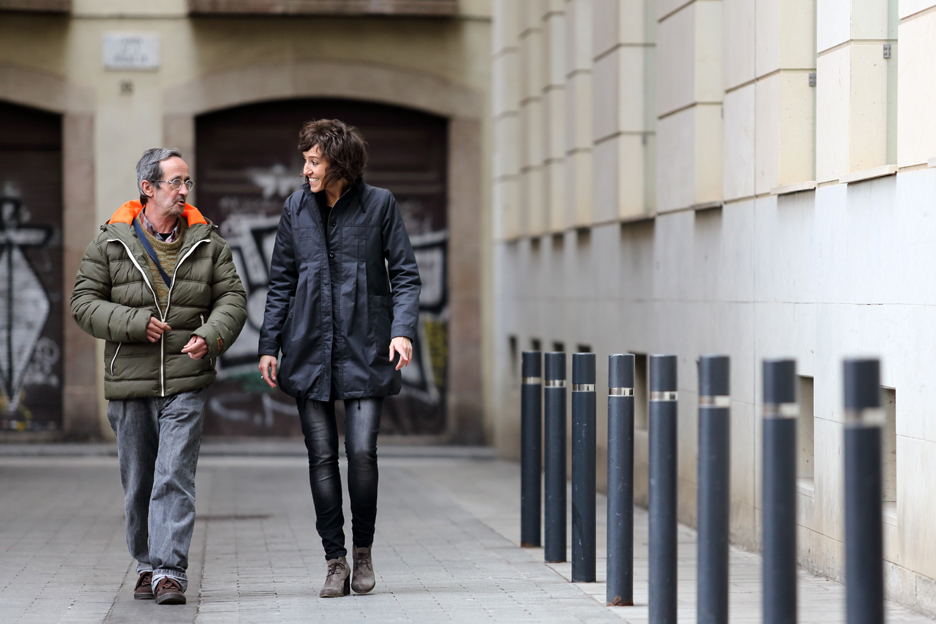 Angel lived in the street for many years and now he tells his experience to secondary school students in a different and unusual way: taking them to visit the neighbourhood he used to live in. The initiative is contained within the project “Passejant Junts”. Agnès Marquès, board member of Arrels, relates a guided visit with Angel in the text below.

“Many good things have happened in the last twenty years but Angel expresses that he does not miss none at all. Three years ago he asked for help to leave the streets. To stop living on the street. He is 52 years old, he is not a kid any more and the covens of Gracia neighbourhood don’t taste the same. He seems ten or twelve years older. Arrels Foundation has helped him and, finally, he is living in a shared flat of the entity with two flatmates. Giving up alcohol was the sine qua non to access the entity program. It was not easy for him. He had been living twenty years on the street and furthermore, alone.

He is very thin and his watery eyes are like a lake’s greenish water. While visiting “his Barcelona”, the places where he had slept, eaten and lived in the last twenty years, he tells me the address of every place we are talking about: Street and number, exact reference, specific place, where to go. Certainty. Security.

About 8,30 am, before the second drink, hidden in a cup of coffee, every day was a question mark. His is a history from when one was able to make a living by selling scrap metal. To beat the life. On a bad day he would get ten Euros. About four hundred per month. It was enough to satisfy his hunger and his two addictions: drinking and smoking. Enough, also, to keep sleeping on the street. After leaving the pub he used to decide to where he would push the shopping cart to search for scrap metal What was the worst? The rain in winter. He says that closing his eyes and shrugging his shoulders as if he was getting rid of bad feeling. He is carrying a folded newspaper in his hand and right now he presses it to his chest.

He has both good and bad days. Some nights, all of a sudden, he feels like to give it all up and go back to the street. It is the influence of alcohol. In that cases what he does is to go to bed, listen to the radio and persuade himself that he does not want to go back to look for a place to sleep or to get cold again. In fact, he doesn’t want to drink again although there is something inside him that pushes him. He doesn’t want to be alone again. –I am doing well, he says. I can see his eyes smiling when he tells me that.

It’s been three years now he changed the selling of scrap metal for a new routine. In Arrels, he is asked to do some works, like to take charge of the laundry of the open centre some days a week. He receives a monthly basic income of four hundred Euros. This amount covers the rent and dinner for the whole month and he can still save forty Euros in a savings account. The most he likes is to accompany other users to the doctor. The difference between being accompanied and to accompany. He puts his hand on his chest when he says that it is a thing that fulfil him. Smiling again, he takes out his wallet from his clean-cut jacket. Inside the wallet, instead of a photograph from a wife or a son he has a message: “another day to love”. And now, he grins from ear to ear.

Having finished the route, he asks me where I’m going to. -Go straight on, take the second turn to the left and the first to the right, he tells me it in detail, as a host would show the way to the bathroom for a guest. He is -he has been- the Lord of the city. See you soon but if we don’t, I hope it is due to bad weather.”