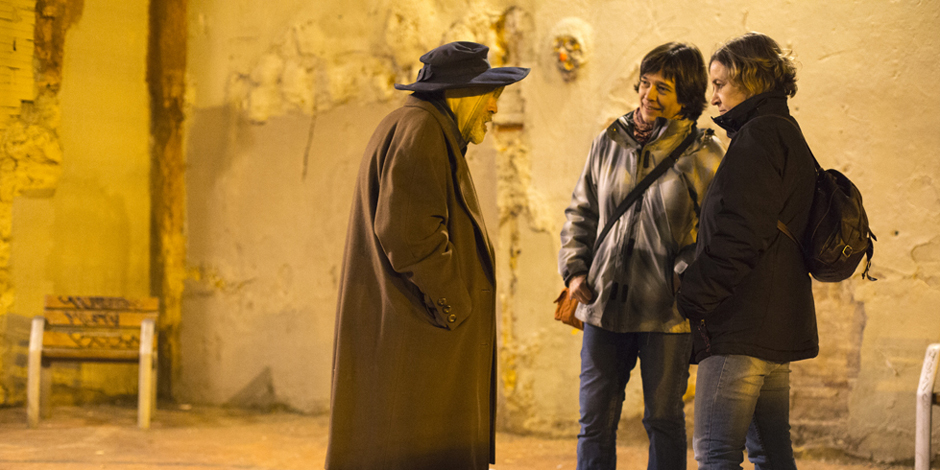 In Barcelona, around 900 people sleep on the street and many have been doing so for a long time. The street teams of Arrels go visit them to know what they need and to be by their side. Last year they were in touch with 611 people.

On Monday at 17h, Anna Plans and Mercè Fabgregat meet at plaça Universitat in Barcelona. They are wearing comfortable shoes, which they will need to walk for three hours, and in their backpacks they have paper towels, money in case they should invite someone to a coffee or a sandwich, and a notebook to take some notes.

Anna and Mercè have worked as a volunteer pair on Arrels’ street team for a year now. Last year, Arrels visited 611 people who live on the street, making 300 new contacts. In total, 19 visits a day with homeless people living in Barcelona, but who come from up to 40 different countries.

“We go out to the street to be beside those who have been living there for a long time. What matters to us is the relationship with the person and being able to give them the tools, when they need them, to be able to improve their situation”, explains the responsible of Arrels’ street team, Miquel Julià.

The city of Barcelona has professional teams that operate in the streets everyday, coordinating with the teams of Arrels. During 2014, Arrels modified the routes to coincide with the municipal teams and to facilitate coordination and information exchange. Now they operate by district; Arrels is present in Ciutat Vella, Gràcia, Sant Martí, the Eixample, Sant Andreu, and Sants-Montjuïc, although the aim is to cover the entire city.

A process of self-help

The Arrels street team is made up of 33 people, the group coordinator, and 32 volunteers that go out in pairs. Anna and Mercè walk around Ciutat Vella every Monday and coordinate with three other teams, which also cover the area during the week. They go by the square in front of the MACBA, along Joaquin Costa street, down the Rambla del Raval and the adjacent parks, they arrive at the Moll de la Fusta and they finish in the Barceloneta. Sometimes they see someone sleeping and do not bother them; sometimes they simply walk past and say hello without stopping; other times, they approach to say hello and talk for a while. There are also some who right from the start turn around and pretend not to see them.

“The objective is to visit them, to go and find them”, says Mercè Fabregat. “Our role is simply to see them as people, help them recover their self-esteem through our way of seeing them. If you ignore them, they are nothing. If you see them, they embark on a process. They aren’t dirt and we aren’t the trash”, says Anna Plans, who points out “street with no exit” for those immigrants who are living in the streets without any papers.

From these relationships, situations are created: a person may asks to go to a soup kitchen or to come and take a shower at Arrels, to see a doctor or to go the emergency room at the hospital, ask for someone to accompany them to a consulate to ask about obtaining a passport… These are moments that help create a bond.

As street-level volunteers, Anna and Mercè trained with more experienced peers and now they go out one day a week to their designated area. Every two months they meet with the coordinator and the other teams operating in the same area.

The aim of the street team of Arrels is to cover all of Barcelona and to visit more frequently the areas with more homeless people, or where they have the most needs. That is why, in 2015, they will incorporate new volunteers. “The people we find in the street feel that they are in a never ending loop, they lose hope despite being facilitated places in hostels – comments Miquel Julià. The difficulty is compounded: many of the resources that exist don’t offer the continuity to help people get off the street, and there are more homeless people than resources to attend them.”

In this context, the work of the street team is important because it can bring the necessary resources so that the people living in the street can make it out and because they are beside the people that continue to live on the street for however long it takes.

Who goes out to look for homeless people in Barcelona?

In Barcelona, there are several entities that visit homeless people. There is coordination of the work so that the people attended are the same and to avoid duplicating efforts.

SIS-Detecció. This service provided by the city of Barcelona consists of six professionals that go visit people living on the streets and they direct them to the municipal services.

Espai de Vincles Rosalia Rendú. Seven nights a week, three pairs of volunteers go out from 21h to 23h in the Raval, the Gothic area, the Port and Parallel, the Ciutadella, and the Sants and Nord stations. They visit people living on the street and detect new cases.

Projecte Sostre. For a year now, six volunteers go out once a week to Barceloneta, the Born, the Ciutadella park, and the Nord station.