“I was tired of struggling to survive every day” 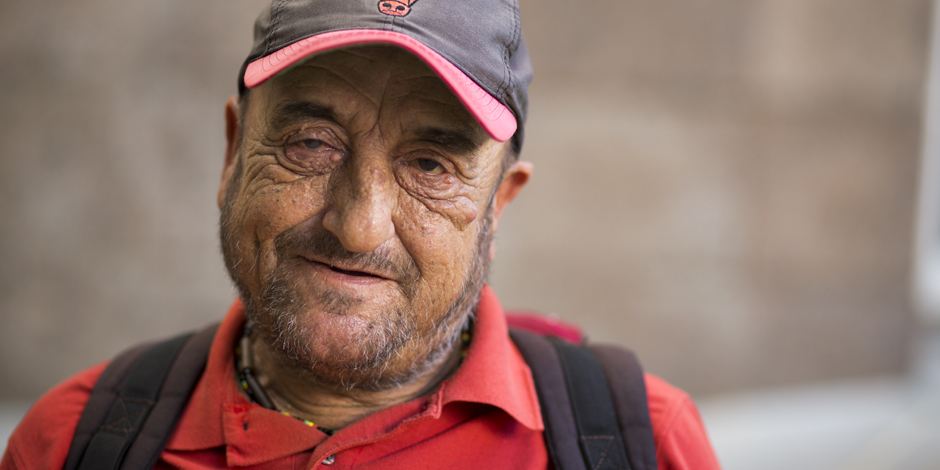 Juan Verdón succeeded in getting off of the streets after living there for 15 years, a process that, he assures us, is tough and hard to go through for most. All the insults and sneers hurt him, but he also does remember all the kind people that helped him in Poblenou, the neighbourhood he got to know from living outdoors and where he still keeps going to spend the day since he belongs there.

Juan is one of the people who have contributed with their perspective and experiences to the report Living on the streets in Barcelona: analysis of a homeless city that you can read here.

You spent more than 15 years living on the streets, and it has been three years since you started living in a shared flat. When going from living on the streets for so long to having your own room and housing, do you think an adjustment period and a helping hand are needed?
I think so. For my part, I didn’t need someone to help me, but I think some people do need it since going from living on the streets to having a home is an abrupt change. I was actually really happy and grateful for having a key, a house, a bed, a shower, a kitchen, etc. It was great but… something felt out of place. Getting used to it was hard. At first I couldn’t sleep because I was in a closed room. I needed fresh air and I had to open the window, I didn’t care if it was wintertime. I spent many years living in a different way. Now I feel at peace and I can rest comfortably, although I don’t sleep how I should. I think that, not having a good rest, will be something permanent in my life, but at least I feel at peace.

How does someone who is living on the street notice that they do want to share an apartment or have one for themselves?
Some of the volunteers here, at Arrels, kept coming to see me when I was on the streets. They got to know me and in no time they told me: “We would like to lend you a hand”. I told them “You know what, I don’t, I don’t need that. I have myself, I don’t need another hand”. And some time later, years later, I told them “I am ready, I need a hand now”. And so they did, immediately.

I went to a hostel, I had stayed there for less than a month when they gave me the apartment I am in now. But because I wanted and needed one. Because I was tired of all that foulness, whatever you want to call it. You can’t sleep, you don’t eat, you only do drugs and alcohol, you’re dead inside. You act like a zombie. You’re here but you’re not really here. You are excluded, you don’t belong anywhere. Worst of all, you get used to it.

What is it with night shelters that makes some people prefer to stay on the streets?
Firstly, they lock you up. In there, you enter at 7 or 8 pm and you can’t get out until the next day. You can’t smoke, you can’t drink alcohol, you can’t do anything, but your body needs it since you’ve been smoking and drinking alcohol for years. And secondly, you don’t feel safe. If you wear sneakers, a single piece of good clothing, once you get distracted… You can’t sleep peacefully either.

A home to feel safe and take care of your health

Do people report these assaults?
You feel like they don’t care, that it isn’t worth it, that you are just wasting your time… You are going to spend three hours at the police office, only if they let you in instead of telling you ‘c’mon, leave’ because you are a vagabond and you don’t have any rights.

Did that happen to you?
It sure did. The scorn. The ignorance. A drunk vagabond. And they don’t even know whether you are a teacher, a doctor, a… they just don’t know. They judge you by your looks. It’s society’s fault, it’s mostly the fault of our justice system, the law or the administration. They should be leading the way in showing respect. But they don’t show us any respect. On the streets you’re an outcast, you don’t have the right to anything. Even though you might be the most wonderful person. They tell you ‘leave, go away’. Everywhere. They don’t try to speak to you nor listen, not ever.

When asking people whether their basic needs are met, some say that they are even if they don’t have a home. Could the reason be that, when sleeping on the streets, their main goal is to survive another day?
Indeed. And whether you survive remains to be seen. As soon as you wake up you don’t have food or money to buy food, you don’t have money to buy alcohol if you like alcohol, you don’t have enough for drugs if you like drugs, you don’t have enough for cigarettes; once you wake up you have to manage on your own. You have nothing, you are by yourself. You use your head and your legs. ‘Hello, good morning.’ ‘Hello, how are you? Do you have a cigarette to spare?’ This is one of the things I was tired of: of spending all day struggling to survive.

What about your own health, caring for yourself?
Usually, people who are on the streets want nothing to do with doctors. You endure whatever life throws at you. No hospitals. There are so many people on the streets dying from pneumonia or any other illness because they didn’t want to go to the hospital… I suffered from periodontitis and chronic appendicitis for four days. I was crushed on the inside and I didn’t go see a doctor until I saw death drawing near. I went to the hospital and they told me ‘if you had come a day later you would have died. Do you have an idea of what’s happening in your body?’

Can someone be so worn down that they lose all will power?
You don’t care about your illness, you don’t care about anything. At one point you yourself think that you’re dead, that you are not normal; there’s a point where you don’t care about your body. You want another second, the present, to pass you by. You keep deteriorating and, once that happens, recovering isn’t easy, you need a lot of character and strength. Many people can’t do that. That’s why they end up dead on the streets. Because they can’t go on, at one point their head, their mind, their everything, blocks it all.