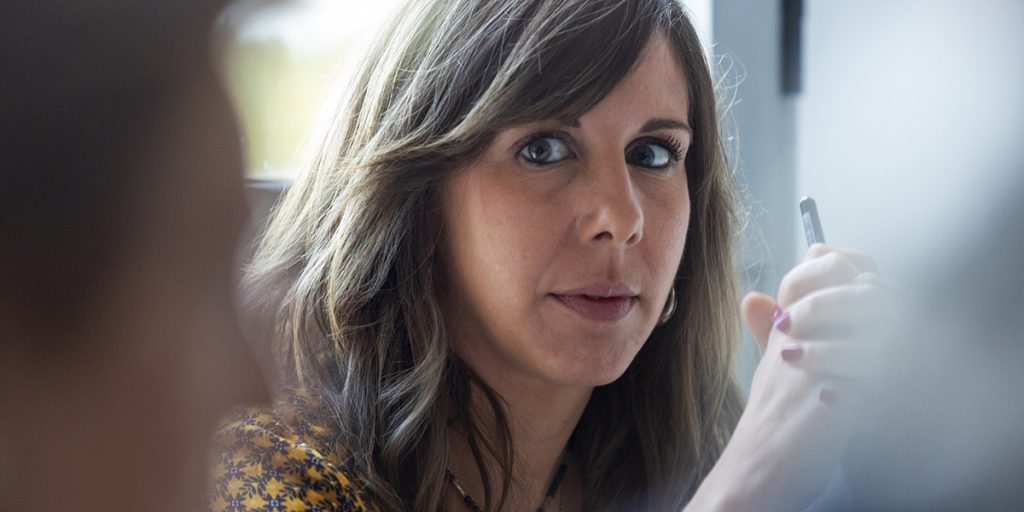 Marta Maynou is in charge of Arrels Fundació’s Host programme, an initiative formed by our street team —which goes out across Barcelona to visit people who have been living out on the streets the longest— and who use the Day Centre, the place to go for essential services such as showers, clothes, and a storage space. As a social worker, she emphasises that people end up on the streets because they have lost several bonds, and that people experiencing homelessness need to regain their confidence, both in themselves and in society.

Marta Maynou is one of the people who have contributed their perspective and experiences to the report Living on the streets in Barcelona: analysis of a homeless city that you can read here.

Most recent data shows that there are 1.239 people sleeping on the street in Barcelona. Over the last years the number of cases has steadily gone up, why do you think that is?
Because of structural reasons, because of the state of the property market and the job market. Because of the arrival of foreigners, as a result of migration. There also is a sense of unease in our society, of which we don’t have any data. Being in a street situation is more than losing your job and not having a home. There are several factors which meld together and cause you to end up on the street. It’s important to have a strong social network to support you. In cases where the person is from another country, they have lost this network, they’ve left it in their home country. Moreover, it’s also a very personal social issue, each person is weighed down by their traumas, family situations, grief, deaths, separations…

In comparison to other years, there are now more cases of young people experiencing homelessness, from 16 to 25 years old. Have you noticed this in your everyday work?
We have noticed such an increase, even though this organisation isn’t specialised in these kind of cases. What we do when they come is advise them on which specialised teams there are and, if they want to, help them contact these services. The care system for young people leaving foster care is really lacking. They are sensitive people going through a delicate situation, and the support services available once they reach legal age aren’t enough.
Since 2018 we’ve improved our registry of people coming to our day centre, even those who just wanted some advice. This 2018, 88 young migrants between the ages of 16 and 25 came to Arrels. Mainly from Morocco. In 2019, there were 148. So, yes, there has been an increase.

According to the census, in average women are now five years older than in 2016, going from 38 to 43 years old.
Usually more men than women come to Arrels. However, women who haven’t been able to avoid this extreme danger zone have less level of competence because, otherwise, you would do anything to avoid ending up on the street. The age factor isn’t helping either. Furthermore, the older you are the less abilities you may have, or the more worn down you are, or the more aggressions you’ve suffered. This year we have welcomed more women than in the last year: 214 in 2018 and 232 in 2019, most of them in between the ages of 36 and 55.
There’s a shortage of attention on female rough sleepers. On one hand, there’s a very masculine homeless support services system and probably a lack of preparation and attention catering specifically to women. On the other hand, there’s a generic care system for women that doesn’t fit most cases of female rough sleepers. These services’ requisites for abused women don’t take into account cases where the woman isn’t yet aware of the abuse and is consuming toxic substances.

Living on the street is a year-long risk

On the matter of vulnerabilities, surely there are as many as there are people on the streets, but can we talk about their main features?
Everything is affected. We have to distinguish between vulnerabilities and needs, since they sometimes go hand in hand. For example, there’s a concern for weather conditions; of course they worsen the risks and the circumstances of those who live on the street, but that’s not where the worst harm is.

There are risks all year long, not only in winter, and not only because of the weather. There’s the issue of aggressions: being exposed and defenceless before the aggression of others. And there are very few reports. There’s the feeling of: ‘Whatever, why should I report it? Nothing will happen. They won’t do anything to the aggressors. So, given my situation, I won’t even bother to go see a doctor to get a medical report and report what happened…’ Legal Services provide a phone number for these reports in order to keep track. They attend each case individually and they collect all the data to give weight to these problems, since these aren’t isolated cases.

Are some people more vulnerable than others?
Some communities are more stigmatised. Being on the street, with no money and in a state of severe exclusion, already means being part of a stigmatised community. In some instances, there are other matters that heighten the risk: gender, nationality, sexual orientation, disabilities… Women, people of the LBGTI community, are more stigmatised and, eventually, they get into trouble and get attacked the most.

Is it considered an aggression when a group of people who have been staying for some time in the same place, like a town square or a street, get thrown out?
We all need a routine, a sense of safety, and they also need it, in their own situation of lack of safety and instability. And, when these evictions happen, their level of safety decreases. For some people, being part of a group helps them feel safer, when you break this, you break their safe space. For them it is a period of uncertainty, because they have to look for another place that they don’t know about in a hurry. Some people have told us  that they feel more fear. It’s another rejection, they throw you out anywhere you go. Rejected again.

A lot of people on the street think that they have got their basic needs covered, a fact that might shock others.
I think people sleeping rough have reduced their expectations to a minimum: getting a shower, clothes and food. It’s obvious that they need proper housing, but it’s not on their list of priorities anymore. What they do is survive.

Some of the people we welcome here don’t care about having a healthcare card and being registered. Does it help, having this documentation? Are they aware of this?
It does help, a lot. The general public take for granted that everyone has a healthcare card and a registration of residency. In Catalonia they provide even more services than in other autonomous communities, and these services reach more people. Even so, it’s difficult to get the healthcare card, even for citizens of other European countries. It should be easier, but it isn’t, because we are asking for this documentation in order to know where the money should come from. Since we’re all members of the European Union, we ask the migrants’ home country whether they have healthcare coverage, to know where they should receive money from. At the consulate they don’t carry out these kinds of procedures so it gets really complicated.

Moreover, having a healthcare card doesn’t mean you’ll get check-ups. When people neglect themselves they endure situations, illnesses, wounds that would shock us and would make us go to A&E as soon as possible; but they don’t. I think there’s a higher resistance to pain at play, a resistance to believing in other’s support, to staying at the hospital.

Having a healthcare card helps you connect with the system and society?
Having a healthcare card means that you take care of yourself and you want to be healthy. This is related to your self-esteem and it is a good start on the journey of getting better. People don’t know what use the registration of residency has; for example, you can use it to start the procedures to obtain financial aid and to improve your situation.