“Being on the streets increases mortality in men and women by a factor of 7 and 11, respectively” 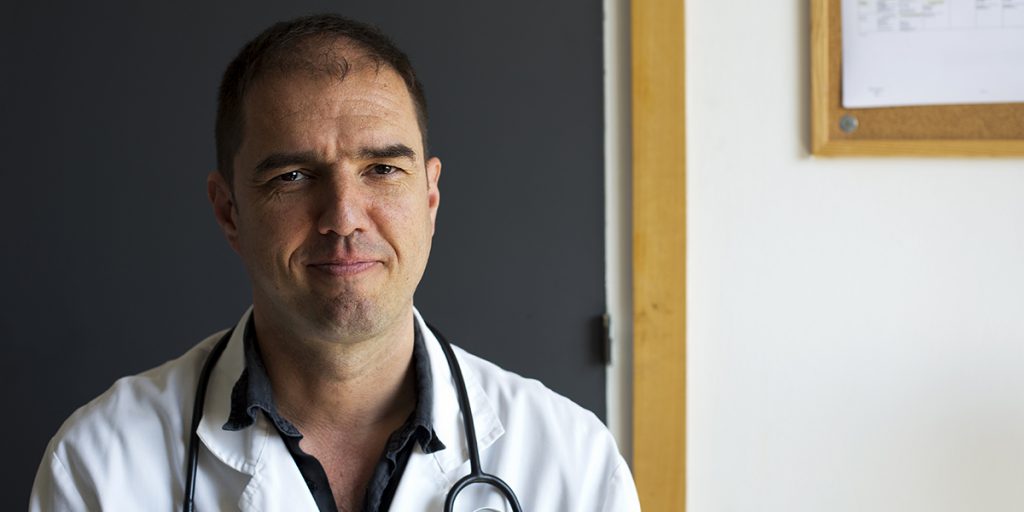 Doctor Daniel Roca is a general practitioner at the Centre d’Atenció Primària Drassanes and the Centre d’Atenció Sociosanitària-Sala Baluard, in the neighbourhood of El Raval. He goes further than just prescribing medication – always ensuring he gives all people a comprehensive medical check-up in order to avoid any health issues. He thinks the system should be more inclusive and  shouldn’t leave homeless people out, since he claims that the system fails to respect their rights and that they are invisible to society.

Daniel Roca is a health and homelessness expert who has contributed his perspective and experiences to the report Living on the Streets in Barcelona: analysis of a homeless city that you can read here.

When people live on the street, their health deteriorates greatly. Who are the most vulnerable?
We can classify illnesses into four main groups: chronic diseases, which would remain the same as with the general population but with a lacking supervision. For example, with diabetes or hypertension. Second branch: infectious diseases, such as viral hepatitis, HIV, sexually transmitted infections, tuberculosis. Third branch: addictions and mental health. Oftenaddictions start as a direct consequence of being on the street, of getting used to it, and sometimes it’s the same pre-existing addiction that has ruined your environment and has led you to the streets. It’s hard to know which came first, the chicken or the egg, but we do know they coexist. Not having access to housing coexists with a higher incidence of addictions. The fourth branch would be accidents, any illness caused by an accident and trauma. Living on the streets is much more than being cold and sleeping on the hard floor, it also means you’re exposed to potential aggressions, to robbery, to being attacked.

All these highly vulnerable people, when do they get a check-up?
Rough sleepers can’t easily access the healthcare system in the conventional way, they don’t tend to get check-ups and when they do go it is because they feel unwell. That’s when they use A&E. They relate illnesses to pain, so if they don’t feel pain they think it’s not serious, and that’s how chronic illnesses, such as diabetes, remain unnoticed.

A&E services aren’t used correctly. Obviously, when a rough sleeper feels unwell and uses those services it’s because it’s serious, but that’s not the way to use A&E services. They don’t have a proper healthcare mentality, which means that they only get a check-up when they are in an awful condition and they usually go through A&E. And it usually is too late.

How can we reach those rough sleepers that don’t get check-ups?
There’s an accessibility and resources problem. Our healthcare system has been stressed and overloaded for years. Long-term strategies are being applied, since short-term strategies only lead to a waste of resources. We should adapt healthcare resources to their characteristics, their situation, as a way of preventive action, of improving their access to any kind of medical care in order to avoid worst case scenarios.

“Restoring your dignity as an individual, with your own rights, won’t happen overnight”

When people sleeping rough go to live in a room or an apartment, is it possible that some hidden issues or illnesses emerge?
When someone is living on the street, their priority is to survive, to avoid getting robbed or attacked. This means that they only have plans for the short term: I have to survive, to live to see another day. If, in a case of emergency, this person gets offered a way to get off the street, so that they don’t get cold and are able to sleep on a mattress, this person stops sleeping rough, but they still have a rough life. They don’t have to worry about getting robbed, being attacked or being exposed to other threats. But it’s possible that once they have a place to stay, thus covering one of their needs, some other needs will paradoxically surface since they were hidden under the bigger problem of surviving each day.

Although their situation improves since they don’t have to sleep on the street, do they need an adjustment period?
They obviously need an adjustment period. People experiencing homelessness suffer from social exclusion and are invisible to society. Recovering physically and restoring your dignity as an individual, with your own rights, won’t happen overnight.
We’re talking about people who have on and off the streets been for a long time, mistreated people who have gone through all kinds of abuse, having to adapt themselves to a hostile situation. Some of them get their own apartment and yet they sleep on the kitchen floor.

Feeling like you are invisible can be as harmful as an illness?
It’s really messed up being on the street feeling like you’re invisible, like nobody cares about you, like there aren’t rights for you, like you don’t have rights, like you aren’t a real person. What’s more, if you don’t have any documentation or papers, you’re stateless, you’re nobody, the only thing you do is to exist, but that’s the only thing you have. You don’t exist in statistics, you are nobody’s problem. All of this leads to a lack of dignity. And recovering it all is hard.