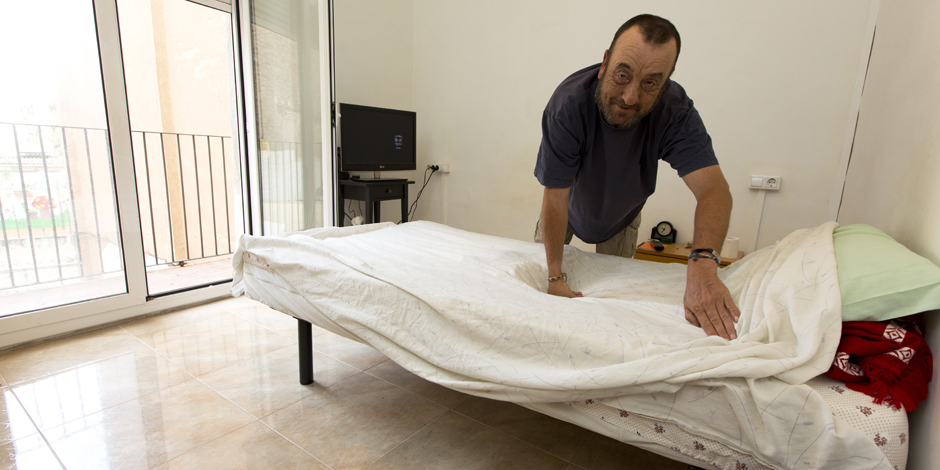 In 2017, Arrels has helped more than 1,912 people, a similar number to the previous year and which amounts to a 50% increase in five years. The amount of people who use the basic services that we offer has also increased. The main difficulty that we have come up against is finding stable and affordable accommodation that will allow more people to stop sleeping on the street.

These statistics are still provisional, but at this stage we are able to reveal the most important figures and the trends of the last years. Towards February we will publish the definitive statistics for the year along with our annual report.

In the past year, Arrels has helped 1,912 homeless people in various ways: visiting them in the street, offering them a place to shower and to leave their belongings, accompanying them to the doctor, providing stable accommodation, etc. Of this total number, we helped 675 of these people for the first time.

The number of 1,912 is very similar to the total amount of people we helped last year, but amounts to an increase of 50% since five years ago.

In 2017, our outreach team has visited more than 400 people who live on the street in Barcelona and 1.518 people have made use of our organization’s open centre – where people can take shelter and access basic services. That means fifty people more than in 2016 and a 73% increase on five years ago.

Of the basic services we provide, our showers and wardrobe were used by 628 and 911 people respectively, and throughout the year the public lockers service has been at the limits of its capacity: a fact that is significant as there is no other similar public service on offer in Barcelona.

Also, according to data recorded in the last six months of the year, the workers and volunteers at Arrels have listened to, assessed, and redirected 572 homeless people who came to us looking for help but who we couldn’t support for lack of resources to other services in the city.

Arrels’s objective is to make sure that nobody needs to sleep on the street in Barcelona and, for that to be possible, stable and accessible accommodation is a necessity. The rising prices of accommodation in the city have made it more difficult to find new flats. At the beginning of 2017, we were managing 76 flats and, at the end of the year, the number has risen to 77.

This trend is a reality that we have been living with for a long time and one which concerns us. Two years ago, our concern was finding accommodation at an accessible price because rents had risen. In 2017, we were unable to increase the amount of homes for people who do not have one. Besides which, in 2018, a number of rental contracts for the flats we manage are due to end, and we are unsure of whether the contracts will be renewed or if the price will go up.

For now, in 2017 we were able to provide accommodation for 248 people, the majority in individual and shared flats, but also in Llar Pere Barnés, the residence which welcomes people who have lived in the street and who suffer from fragile health – as well as in rented rooms. In this sense, and in order to adapt to the necessities of people who cannot find a place to stay in these types of resources, at the beginning of 2017 we opened Flat Zero – a small and local space which people can access with their belongings.

At Arrels we believe that this type of accommodation can be a useful tool – applicable across the different barrios of Barcelona – which can offer a short and mid-term safe space for the 1.026 people who every night sleep rough, while we work to find viable and affordable accommodation.

Five alerts a day from members of the public

The problem of homelessness has increased in recent years. As well as the 1,026 people that sleep on the streets of Barcelona every day, 2,006 more depend on public and private resources that exist in the city and more than 400 live in squats… irregular situations/ settlings.

As such, members of the public in Barcelona and in other areas have contacted us throughout 2017 to express concern about the situation of people sleeping in the street. On average – and taking into account all the different methods of contact – we received five calls a day from members of the public.

In all, we fielded over 2,000 warnings, the majority of them through the #Arrelslocator App, followed by alerts made through the Arrels website, our social media channels, and by telephone.