1,301 people sleep on the street in ten municipalities in Barcelona 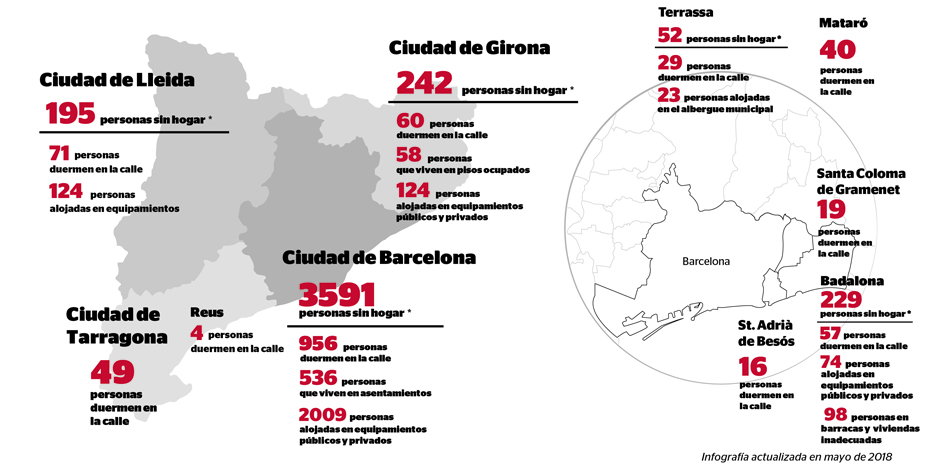 Terrassa, Barcelona, ​​Badalona, ​​Sant Adrià de Besòs and Santa Coloma de Gramenet have made recounts of homeless people this week. These figures are added up to the ones already done previous years in Girona, Tarragona, Lleida, Mataró and Reus. In Catalonia, we don’t have updated figures to size homelessness but we know that at least 1,301 people sleep on the street in these ten municipalities.

The night of the 16 to the 17 of May, more than 1,200 volunteers have wander around the streets of Barcelona, ​Badalona, ​​Sant Adrià de Besòs and Santa Coloma de Gramenet to count how many people sleep outside. The night of the May 14th, in Terrassa, was done the same action. We have to bear in mind that figures are minimum numbers because it surely were more people that we didn’t found.

In 2015, the Parliament of Catalonia urged the Government of Catalonia to make biannual recounts to size homelessness. Currently, only these ten Catalan municipalities have gone out to count people that sleep outside.

At Arrels, we think it is necessary a Catalan vision of homelessness and we have created a Practical guide to organise recounts and to encourage more municipalities to size the problem. The figures help to improve assistant services and to draft effective policies to make possible #nobodysleepingonthestreet.